Attitudes and Knowledge about Zoonotic Diseases among Livestock Farmers in Rural Tamale, Ghana

Attitudes and Knowledge about Zoonotic Diseases among Livestock Farmers in Rural Tamale, Ghana

Livestock farming plays a significant role in sustaining rural livelihoods by providing a source of income, food, manure, and draught power [1]. It remains one of the livelihood strategies among the rural folk in Northern Ghana and is kept for both commercial and subsistence purposes [2]. However, the emergences of livestock-associated infections remain a threat to livestock production and the human population. Common infectious diseases that are naturally transmissible from vertebrate animals like cattle to humans and vice-versa are classified as Zoonotic Diseases (ZD) [3]. These diseases are a major public health concern and are known to account for approximately 61%-75% of emerging infections that affect the human population especially in Sub-Sharan Africa [4-6]. Further, contemporary studies have revealed that nearly 20% of all human morbidity and mortality especially in developing countries are strongly associated with endemic zoonosis [7-9].

Socio-demographic variables such as educational status and lack of awareness on zoonotic diseases may partly explain inadequate knowledge and poor attitudes towards the prevention of zoonotic diseases among livestock farmers [4,10,11]. Also, the risk of these diseases is heightened by close contact with animals, poor hand hygiene, poor sanitation, and unvaccinated, free-ranging animals have been linked with zoonotic transmissions [12,13].

A descriptive cross-sectional study was being conducted from May 2019 to June 2020. A mixed-method (quantitative and qualitative) approach was employed for the study. This provided a more holistic approach to the study, whereby the weaknesses of one method were compensated for by the strengths of the other instruments and vice-versa. This approach also provides a multi-perspectival dimension to the study. A focus group guide was adopted in conducting the Focused Group Discussions (FGDs) guide to ascertain information regarding knowledge and attitudes on zoonotic diseases amongst the study participants. In conducting the study, five focus group discussions were organized, one in each of the selected communities. A survey questionnaire was also used to gather the quantitative data. In all, 100 questionnaires were administered to one hundred livestock farmers in the study communities who were purposively selected.

The knowledge assessment questions on cattle-related zoonotic diseases comprised of 7 questions (Table 1). The knowledge was categorized into poor or good based on the knowledge score of participants. A correct knowledge response attracted one (1) mark. A total score of 50% and above was considered good knowledge and a total mark of less than 50% were considered poor knowledge.

The attitudes on cattle-related zoonotic questions consisted of five (5) main questions (Table 2). Participants were categorized into having poor or good attitudes depending on the score of the participant. A correct practice attracted one mark. A total mark of 50% and above was considered a good attitude and a total score of less than 50% were considered poor attitude.

Regarding the practices, a “yes or no response” was elicited from the respondents based on 5 questions as outlined below:

• Do you always apply soap when washing hands

• Do you think washing hands is important in handling the cattle

• Do you use any protective clothing before attending to the cattle

Data obtained for the quantitative part of the study was entered on Microsoft Excel 2010, validated, and later exported to SPSS for further data management and analysis. The results of the study were presented in frequency, percentage, charts, and tables for clarity. A test of association between the explanatory and outcome variables was performed using the chi-square test at a significance of p<0.05. The qualitative data were transcribed and analyzed using content analysis.

At the Bilpella a participant reported as follows:

“Zoonosis diseases are real, but we are not getting enough education on them, unlike crop farming where every time all radio stations are talking and educating farmers on when to cultivate and the type of seeds to use hmmm!! That type of education is not given to we the animal farmers perhaps they think we are in the minority and not important….” 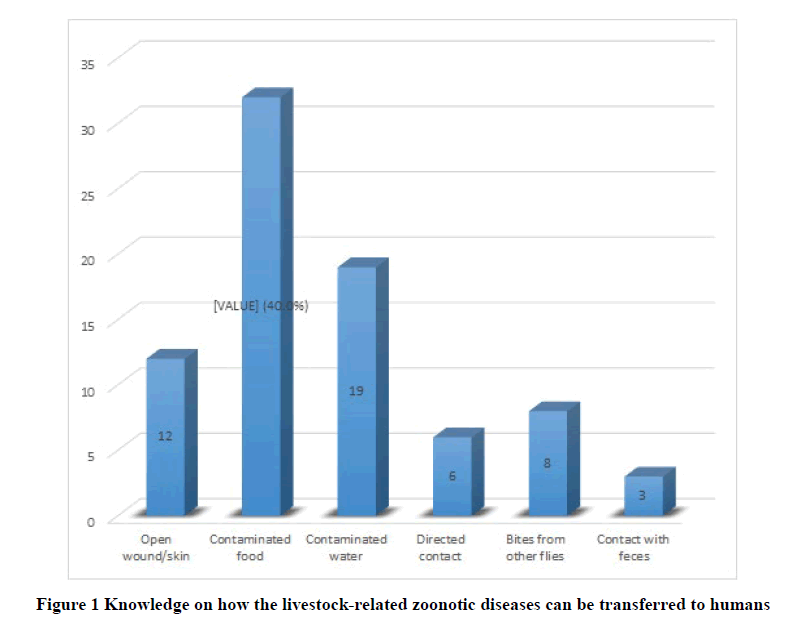 However, only 20 (20%) agreed that walking barefooted in the “animal house,” does not put them at an increased risk of contracting the cattle-related zoonotic disease. Also, enquiring whether cattle droppings/manure do not contain any infectious disease agent, 22 (22%) disagreed. Lastly, on whether deworming of the cattle protects them totally from any infection, 24 (24%) of the participants agreed.

The social demographic characteristics were considered as independent variables and were analyzed with the outcome variables (knowledge on cattle-related zoonotic diseases, attitudes, and practices of good animal husbandry) by chisquare test (Table 3). The result revealed a significance in the age (p=0.022) of participants and their attitude. Regarding the direction of this observation, participants within the age range of 41-50 years old appear to have a good attitude toward animal husbandry compared with their colleagues who were outside this age bracket.

Table 3 Relationship between sociodemographic characteristics, level of knowledge, attitude, and practices as analyzed by Chi-square test

Regarding the attitudes of cattle farmers, most of them recognized that drinking raw milk from cattle increases the risk of getting cattle-related zoonotic disease coupled with direct contact with animals or their droppings. Though the farmers portrayed good attitudes towards cattle-related diseases, nonetheless the question to ask is whether good attitudes translate into good practices? From the results of the current study, it appears that good attitudes do not necessarily translate into good animal husbandry practices. As in this study, poor animal husbandry practices were acknowledged among some of the farmers (84%).

In this study, it was observed that the majority of the cattle farmers (96%) keep their cattle in the open with less than half of them (29%) of the participants engaged in cleaning of places where the cattle are kept and only 33% of the participants equally indicated sanitizing feeding troughs/water cans. These findings are in line with the results of a previous study, and further, corroborate earlier studies that livestock including cattle are mainly raised through backyard farms [12,17-19]. This form of raising livestock is preferred because it less capital intensive [20].

The practices of hand hygiene among the participants were generally poor in this study because very few of the cattle farmers (8%) admitted applying soap when washing their hands. The use of protective clothing before attending to the cattle was generally low among the farmers. In line with the present findings, Caknur, et al. observed that only 35.8% and 6.6% of the farmers interviewed indicated they use hand gloves and face masks, respectively [21].

The handling of cattle-related zoonosis was also generally poor among the cattle farmers. As most of the common practices of handling cattle-related zoonotic diseases included self-medication. Interestingly, most of the participants indicated they sell the cattle if the disease or sickness of the cattle does not resolve after treatment. This was in sharp contrast with the assentation made by Caknur, et al. as 80.1% of the farmers recognized that sick animal corpses needed to be buried deep, however only 22.5% of the farmers indicated destroying the sick animal corpse by burying deep [21]. Further, the sociodemographic characteristics such as leaving close to the cattle are associated significantly with knowledge and attitudes. Also, the age and educational status of participants related significantly to their attitude towards zoonotic diseases. These findings are similar to previous reports in India, Ethiopia, and Southern Ghana [10-12].

The study revealed an appreciable knowledge of cattle-related zoonotic diseases among the farmers. Additionally, the study portrayed that the majority of the study participants had good attitudes. In contrast, their practices of good animal husbandry were extremely poor. This creates a worrying situation as at the time the Government of Ghana is promoting the rearing of animals for food and jobs. Therefore, the Ministry of Agriculture and authorities of the Tamale Metropolis ought to design public health education programs to help increase the knowledge, attitudes, and practices of the cattle farmers towards zoonotic-related diseases in the Northern Region.

The study was cross-sectional in design. Therefore, the findings do not represent causal effects. Moreover, the sample size was small. The use of prospective study designs on the subject may be more useful in validating the present results.

We are very grateful to all participants of the study and the staff of the Community Health and Family Medicine Department for their contributions in making this study a success.

This research did not receive funding from any source.

The study was approved by the ethics review committee of the University for Development Studies, Ghana.