Ultrasound screening is recommended for newborn babies in many countries to rule out Developmental dysplasia of hip (DDH) as it is more sensitive and specific compared to clinical examination. The purpose of this study was to perform a preliminary assessment of neonatal hips in our region and highlight the magnitude of DDH as there is lack of local literature on this subject. We evaluated 132 hips newborns referred to our department using Graf static method of alpha and beta angle measurement and classification. The data collected was statistically correlated. Mean age was 1.5 days. There was no statistically significant difference between the mean alpha and beta angles of right and left side of hips or between male and female babies. The predominant hip type in both genders and on both sides was Graf Ia (75% of right and 69.9% left sided hips) followed by IIa. Although the vast majority of babies had normal or physiologically immature hips, a small number of children had abnormal hips requiring treatment. In order to diagnose the highest possible number of cases, we recommend further large scale studies targeting our population on the basis of which universal or selective screening programs for a wider clinical application could be based.

Every newborn baby should be thoroughly examined and investigated for congenital anomalies including musculoskeletal anomalies. Some of the musculoskeletal congenital anomalies are obvious, such as clubfeet, constriction bands, limb length discrepancies, radial or ulnar club hand however Developmental dysplasia of hip (DDH) is a concealed anomaly. DDH encompasses a broad spectrum of developmental anomalies of the femur and acetabulum ranging from mild dysplasia to frank hip dislocation [1]. It is one of the important, common and potential preventable cause of disability with great socioeconomic implications [2]. As the condition is painless and the baby moves the hip joints quite well, it can frequently be overlooked. Delay in diagnosis and thus treatment results in extensive surgery with potential complications [3] and unrecognized and untreated cases can lead to premature osteoarthritis [1]. Risk factors [4,5] for DDH include positive family history, first pregnancy, breech presentation, female gender, oligohydramnios, limited hip abduction, talipes, swaddling and large birth size [6]. Female sex is the only isolated risk factor with a PLR (positive likelihood ratio) predictive of DDH [7]. In most cases the diagnosis of hip dislocation can be made by clinical examination of the newborn, but it is impossible to diagnose hip dysplasia (in which the hip is reduced but the acetabulum is shallow or underdeveloped) by clinical examination, additionally there may be a false positive click (e.g. snapping hip) on clinical examination. Hip dysplasia can easily be diagnosed by Ultrasound evaluation of the newborn’s hip by an experienced sonologist [8] a technique introduced initially in the 1980s [9,10]. A 15 year study found that ultrasound outperforms clinical examination, with a positive predictive value of 49% as compared to 24% with clinical examination [11]. In most of the developed countries ultrasound of the hip is performed in every single newborn, regardless of any risk factors [12], however the appropriate utilization of ultrasound screening for DDH is still controversial, with some countries and studies advocating universal screening, while others stressing selective screening (babies having two or more risk factors) [13,14]. The impact of ultrasound on diagnostic thinking and decision making of suspected DDH was 52% in a study [15].

High resolution ultrasound evaluates the relative position of femur and acetabulum. Alpha and beta angles are measured and hips classified according to the most widely used Graf method. Alpha angle determines the sonographic hip type and is formed between the straight lateral edge of ilium and bony acetabular margin. Beta angle is formed between straight lateral edge of ilium and fibrocartilaginous labrum, it determines the sonographic subtype of hip [1,13].

Ultrasound is readily available in almost all areas of the country and is an invaluable tool for diagnosis, management and surveillance of treatment [13]. Although, calculation of alpha and beta angles requires some expertise, but with minimal training, it can be easily learned and practiced. The inter-observer reliability of calculation of alpha and beta angles is very good [16,17]. Some radiologists use other methods [18] and dynamic assessment which evaluates the stability of the hip by observing the movement of the femoral head in and out of the acetabulum.

Our country does not have any screening program for neonatal hip assessment and there is lack of local literature on this subject. To the best of our knowledge, no local study addressing the incidence, presentation, diagnosis and management of DDH has been found in the local literature. The purpose of this study was to perform a preliminary assessment of neonatal hips in our region and highlight the magnitude of the DDH.

This study was performed in the Radiology department of tertiary care, POF hospital Wah cantt. Approval was taken from the ethical committee of hospital. Stable, new born babies were referred to our department for sonographic screening for developmental dysplasia of hips. All babies regardless of gender, period of gestation or mode of delivery referred to us with in the first week of their life were included in the study. Static hip assessment of both hips was done using 7.5 MHz high resolution linear probe with the baby lying on its side or lateral position with the hip slightly flexed. Scanning was done with a high frequency linear probe and the focus set at the acetabular edge. Alpha and beta angles for right and left hip were measured and documented by Graf method. These measurements were used to detect the presence of hip dysplasia and to classify it into different types using the most widely accepted Graf’s classification. Syndromic babies were excluded from the study. 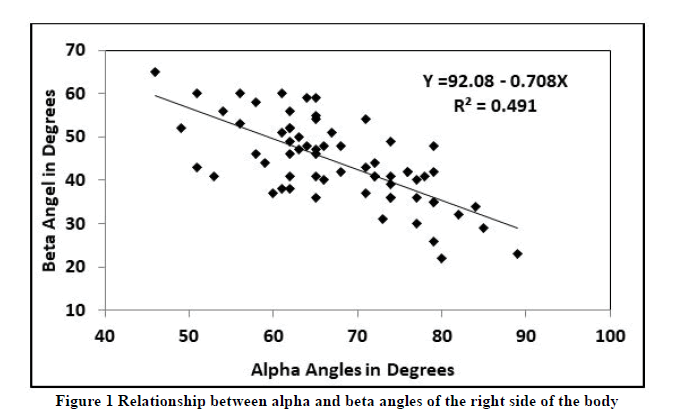 Figure 1. Relationship between alpha and beta angles of the right side of the body 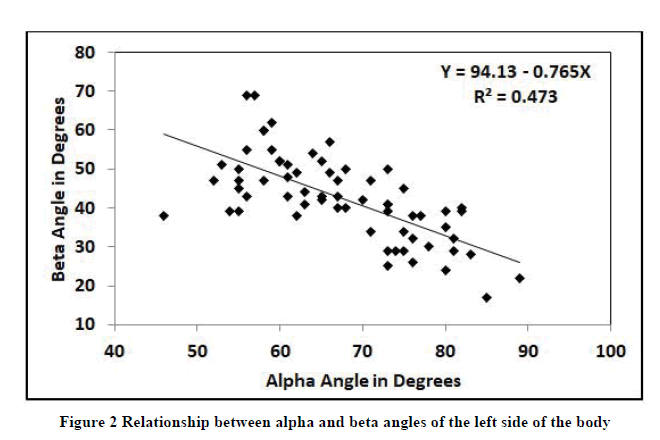 Figure 2. Relationship between alpha and beta angles of the left side of the body

Table 5 shows distribution of hip types by Graf classification according to sides i.e. right & left. Graf type Ia hips (normal and mature) were by far the most common constituting 72.45% of all hips with 75% for right hip and 69.9 for left hip. Graf type IIa (physiologically immature) hips were the second largest group accounting for 18.5% of the total hips. These two types are considered normal for new born babies, however Graf type IIa require a follow up ultrasound study at three months of age to see for the proper development of the hip. 2.25% hips fell in Graf IIc category which requires active management and treatment.

Ultrasound of the newborn hip is now an established technique to confirm or refute the diagnosis of DDH. It not only diagnoses the dislocation but can also confirm and calculate the dysplastic acetabulum. In our study of 132 hips, 77.2% of babies had normal hips, 18.5% babies had immature hips and 3.75% babies had abnormal hips requiring treatment. There was no statistical significant difference between the alpha angles of the right hip (67.7) and that of the left hip (67.24) although in literature the left hip is more commonly involved [5] than the right hip in case of DDH, so theoretically the alpha angle should be lower on the left side as compared to the right side.

Lussier, et al. [21] screened neonates for hip dysplasia, in their study they found out that 86.6% of the newborns screened within 28 days of birth had Graf type 1 hips, while 77.2% of our hips were Graf type 1. However they recommended to screen the hips by ultrasonography at 4 weeks of age, as it improves specificity with reduced false positives and follow-up visits and also reducing overtreatment, but this method of delayed ultrasonography is not suitable in our country because we do not have any screening program and many of them will lose follow-up resulting in neglect of the condition. Rawlings stated that the exact timing of ultrasound does not make much difference [22].

Radiographs are not diagnostic early in life as the femoral head is not ossified till about 4 to 6 months of age thus not visible on X-rays and they also have the inherent risks of ionizing radiation. An alternate method is the use of arthrography, which is a very good technique to assess the hip joint, it clearly shows the femoral head, the shape of the acetabulum, status of the limbus and gives some idea about psoas constriction. But this is a very invasive method, requires special expertise and general anesthesia for it to be performed. Conventional arthrography is now being replaced by Magnetic Resonance arthrography due to its markedly superior resolution and lack of side effects such as ionizing radiation.

The major limitation of our study is the small sample size and our inability to follow up these babies upto at least 3 months. Moreover the ultrasound and measurements were done by a single operator.

Although the vast majority of babies had normal or physiologically immature hips, a small number of children had abnormal hips requiring treatment, so our population have better developed acetabulae as compared to many other studies. The risks associated with delayed diagnosis and treatment of DDH emphasizes the importance of early diagnosis. Neonatal hip ultrasound is the standard method for screening for DDH. In order to diagnose the highest possible number of cases, we recommend further large scale studies targeting our population on the basis of which universal or selective screening programs for a wider clinical application could be based.

No benefits in any form have been received or will be received commercially related directly or indirectly by any of the authors for this article, and there is no conflict of interest for this study.