The differential diagnosis for Pyrexia of Unknown Origin (PUO) remains extensive. The most common PUO categories are infectious, neoplastic, rheumatic, and inflammatory. It is important to remember that PUO is far more often caused by an atypical presentation of a rather common disease than by a very rare disease. We report a series of cases of patients with subacute thyroiditis presenting as PUO.

Discussion/Conclusion: All reported cases of PUO had similar findings in each of the patients, well-documented as subacute thyroiditis. Sub-acute thyroiditis should be considered in the diagnostic workup of PUO even in the absence of overt toxic symptoms of thyroid hormone excess. Early recognition and timely anti-inflammatory therapy may help in successful management.

Pyrexia of Unknown Origin (PUO) was originally defined by Petersdorf and Beeson in 1961 as illness of >3 weeks’ duration with fever ≥ 38.3°C (101°F) on two or more occasions and an uncertain diagnosis despite 1 week of inpatient evaluation [1]. It was further modified by the exclusion of immuno-compromised patients; whose workup requires an entirely different diagnostic and therapeutic approach. The differential diagnosis for Pyrexia of unknown origin remains extensive. The most common PUO categories are infectious, neoplastic, rheumatic, and inflammatory [2]. It is important to remember that PUO is far more often caused by an atypical presentation of a rather common disease than by a very rare disease. Fever may accompany several endocrine diseases [3]. These endocrine causes of PUO may be rare. The most common endocrine disorder presenting as PUO is sub-acute thyroiditis [4].

A 54 yrs. old male, with no previous comorbidities, was hospitalized with a complaint of low-grade evening rise of temperature associated with malaise, headache, arthralgia, and night sweats for 2 weeks. Before hospitalization he was treated with antipyretics, however, he remained febrile. There was no history of upper or lower respiratory tract symptoms nor any history of vomiting, visual disturbance, seizures, or weakness of any limb.

The results of the general physical examination were unremarkable. During the hospital stay his temperature showed an intermittent pattern with low-grade fever and tachycardia. There was no tenderness, enlargement over the neck, or any lymph node swelling. The patient did not show any signs of thyrotoxicosis. Chest radiography was normal. He was given a full course of tab chloroquine and empirical broad-spectrum antibiotics for 7 days. Lab finding was as per Table 1.

He continued to be febrile with persistent headaches. In view of which CSF examination was done wherein CSFcytology/ biochemistry/ADA/culture showed normal results.

To investigate persistent tachycardia, thyroid function tests were done which revealed elevated Serum T3, T4 levels with suppressed TSH as shown in Table 2. Thyroid Peroxidase Antibodies (Anti-TPO) were raised. Ultrasonography Neck showed a single nodule in each of the left and right lobes of the thyroid gland with no enlargement.

Fine Needle Aspiration (FNAC) of thyroid gland nodule was done which was suggestive of granulomatous thyroiditis. Slide as seen in Figure 1. 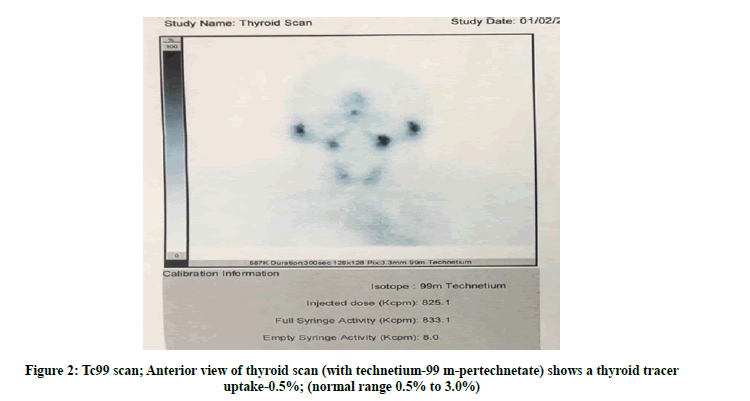 Based on the above descriptive evidence, a diagnosis of subacute thyroiditis was made. The patient has then treated with Tab Naproxen 500 mg twice a day for 10 days. The patient gradually responded to non-steroidal anti-inflammatory drugs and was discharged after 72 hours of being afebrile.

A 61 yrs. old male, known case of frontal lobe meningioma (operated), dyslipidemia, Type II Diabetes Mellitus and hypertension was admitted with low-grade fever associated with chills and drenching night sweats of 3 weeks’ duration. He also gave a history of anorexia with a weight loss of 3 kg within the last 3 months. No history of cough/ running nose or pain abdomen/nausea/vomiting.

There was no tenderness or enlargement of the thyroid gland or any other lymph node. There were no signs of thyrotoxicosis. Lab findings were as per Table 3. Thyroid function tests for the patient were as per Table 4. Chest radiography showed normal findings.

Based on the above descriptive evidence, the diagnosis of subacute thyroiditis was made. The patient gradually responded to non-steroidal anti-inflammatory drugs. The patient was followed up on an OPD basis and became symptom-free after 04 weeks of treatment with NSAIDs (Tab Naproxen 500mg twice a day).

55 yrs. old female, known case of hypertension, hypothyroidism, and obstructive sleep apnea presented with a history of low-grade fever associated with night sweats for 3 months. She also gave a history of pain in the neck, more so left-sided while speaking or during deglutition. She did not give any h/o cough with expectoration/dyspnea. There was no h/o dysuria. She had been taking over-the-counter medicines for the last 3 months whose description was not available.

The patient was conscious, well oriented, Temp-99.2°F, Pulse-84 beats/min, BP-126/70 mm Hg, Respiratory Rate- 20 breaths/min. No pallor, icterus, cyanosis, lymphadenopathy, or clubbing was noted. There was no enlargement or tenderness of the thyroid gland or any lymph node. There were no signs of thyrotoxicosis. The results of the physical examination were unremarkable. Lab findings are shown in Table 5. Chest radiography showed normal findings.

She was given a full course of tab chloroquine.

Thyroid function tests for this patient are as under in Table 6.

Thyroid scan with technetium-99 m pertechnetate thyroid scan revealed thyroid lobes with mild, heterogeneous uptake-0.2% (normal range 0.5% to 3.0%), however, could be erroneous given exogenous administration of Tab Eltroxin as shown in Figure 4. In absence of any other etiology of pyrexia, she was treated with non-steroidal anti-inflammatory drugs (Tab Naproxen 500 mg for 14 days) and had gradual remission of symptoms.

In this series of cases, after extensive investigation of Pyrexia of unknown origin, a final diagnosis of subacute thyroiditis was made in all the cases. The most common disease we come across in such cases is Tuberculosis. Thus, it is not infrequent a diagnostic dilemma for clinicians which often requires extensive diagnostic evaluation.

A large group of endocrine and metabolic diseases is mentioned among which less common causes of PUO, include thyroiditis, hyperthyroidism, Addison’s disease, and Fabry’s disease [5].

A review of the literature revealed that thyroiditis manifesting as PUO could be possible without anterior neck pain or symptoms of thyrotoxicosis, while typical features of thyroiditis are the gradual appearance of pain in the region of the thyroid gland and symptomatic thyrotoxicosis [6]. A low-grade fever is reported in a small percentage [7].

Sub-acute thyroiditis (also termed granulomatous, giant cell, or de Quervain thyroiditis) is thought to be caused directly or indirectly by a viral infection of the thyroid gland and often follows with upper respiratory illness. Mumps virus has been implicated in some cases while coxsackie virus, influenza virus, echovirus, and adenoviruses may also be the etiologic agents [8].

Raised ESR is a common finding in subacute thyroiditis [9]. High CRP can also be seen in subacute thyroiditis [10]. Our patients had high CRP. Positive TPO antibodies are present transiently during the active phase of the disease although some patients may retain evidence of thyroid autoimmunity for many years. The disease usually subsides within few months leaving no residual deficiency of thyroid function in 90% of patients. In a rare case, the disease smolders, with repeated exacerbations over many months, hypothyroidism sometimes being the final result. In mild cases, aspirin or nonsteroidal anti-inflammatory drugs or cyclooxygenase 2 inhibitor may control the symptoms. With more severe pain, glucocorticoids are the only solution for extreme discomfort.

To conclude, although thyroid disorders are not a common cause of PUO, initial workup should include thyroid function tests even if it is not suggestive of hyperthyroidism. In our series, two patients reported experiencing drenching night sweats, which is an unusual feature.

Thyroiditis should be included in the differential diagnosis when an exhaustive investigation does not reveal any cause of fever and prolonged NSAIDs therapy to be the mainstay of treatment.

Ethical approval was not obtained for the publication of this case report as this does not involve sharing of personal details and photographs of patients.

Written informed consent was obtained from all patients for publication of this case series. 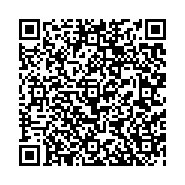